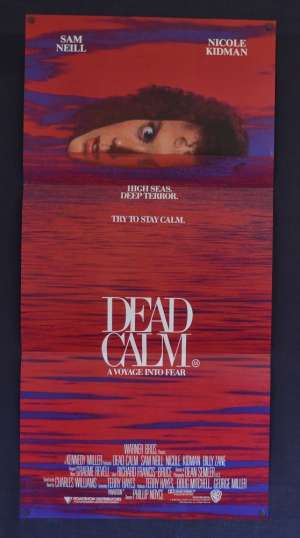 Original Country Of Origin Daybill Movie Poster.Dead Calm is a 1989 Australian psychological thriller film starring Sam Neill, Nicole Kidman and Billy Zane. It was based on the 1963 novel of the same name by Charles Williams. The film was directed by Australian filmmaker Phillip Noyce and filmed around the Great Barrier Reef. Cinematography by Dean Semler and score composed by Graeme Revell. The movie was filmed over a 14-week span in the Whitsunday Islands in the winter of 1987. George Miller (Mad Max) and of ‘Kenndy Miller Productions’ directed some sequences himself, including one where Sam Neill's character is tormented in the boat by a shark. This scene ended up being dropped from the final film. The film was highly successful in Australia and the US.