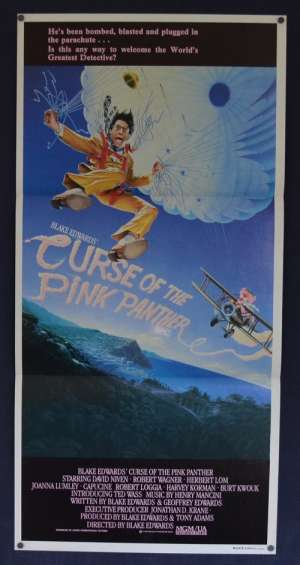 Original Australian Daybill movie poster. Curse of the Pink Panther is a 1983 comedy film. It is a continuation of The Pink Panther series of films started by Blake Edwards in the early 1960's. The film was one of two produced concurrently following the death of the series' star Peter Sellers. Where as the previous film Trail of the Pink Panther made use of unused footage of Sellers as Inspector Clouseau. Curse attempted to relaunch the series with a new lead, Ted Wass, as bumbling American detective Clifton Sleigh, assigned to find the missing Inspector Clouseau. The film features a cameo by Roger Moore—as Clouseau himself—at the end of the film. This was David Niven's final film appearance but he died shortly before its release. This film marked Herbert Lom's 6th outing as Chief Inspector Dreyfus.