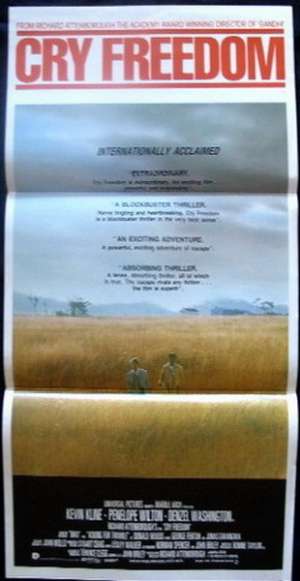 Daybill Poster.Cry Freedom is a 1987 epic drama film directed and produced by Richard Attenborough, set in late-1970s apartheid-era South Africa. The screenplay was written by John Briley based on a pair of books by journalist Donald Woods. The film centres on the real-life events involving South African activist Steve Biko and his friend Donald Woods, who initially finds him destructive, and attempts to understand his way of life. Denzel Washington stars as Biko, while Kevin Kline portrays Woods. Cry Freedom delves into the ideas of discrimination, political corruption, and the repercussions of violence. A joint collective effort to commit to the film's production was made by Universal Pictures and Marble Arch Productions and the film was primarily shot on location in Zimbabwe and in Kenya due to political turmoil in South Africa at the time of production. It was commercially distributed by Universal Pictures, opening in the United States on 6 November 1987. South African authorities unexpectedly allowed the film to be screened in cinemas without cuts or restrictions, despite the publication of Biko's writings being banned at the time of its release. The film met with favourable reviews and was nominated for multiple awards, including Academy Award nominations for Best Actor in a Supporting Role, Best Original Score, and Best Original Song. It also won several awards including those from the Berlin International Film Festival and the British Academy Film Awards.