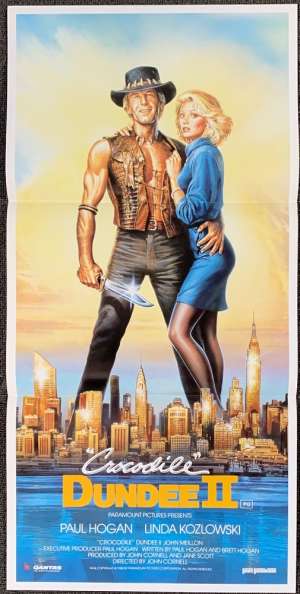 Country Of Origin Daybill Poster,artwork by Brian Clinton.Crocodile Dundee II is a 1988 Australian-American action comedy film. The second of the Crocodile Dundee films, it is a sequel to Crocodile Dundee (1986) and was followed by Crocodile Dundee in Los Angeles (2001). Actors Paul Hogan and Linda Kozlowski reprise their roles as Mick Dundee and Sue Charlton, respectively; here shown opposing a Colombian drug cartel. The film was directed by John Cornell and shot on location in New York City and Northern Territory, Australia. It cost $14 million to make. Crocodile Dundee II was also a worldwide hit grossing $24,916,805 in Australia which is equivalent to $48,843,593 in 2009 dollars. It was the second highest-grossing film that year for Paramount (second only to Coming to America) and the sixth highest-grossing film at the United States box office.