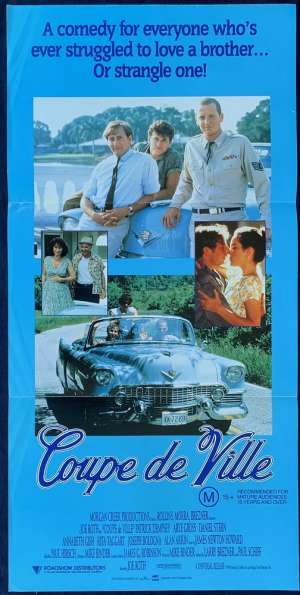 Daybill Poster. Coupe de Ville is a 1990 American comedy-drama film directed by Joe Roth. It stars Daniel Stern, Arye Gross and Patrick Dempsey as three quite different brothers asked by their father to drive a 1954 Cadillac Series 62 convertible from Detroit to Miami. River Phoenix was offered the role of Bobby (Patrick Dempsey’s role) but he turned it down. Despite the film's title, the Cadillac in the movie is not a Coupe De Ville. The Cadillac in the film was a Series 62 Convertible. Interesting fact: Arye Gross, who plays middle brother narrated the pilot episode of The Wonder Years, but was replaced by Daniel Stern, who plays oldest brother Marvin, for the remainder of the series and in all subsequent rebroadcasts of the pilot.