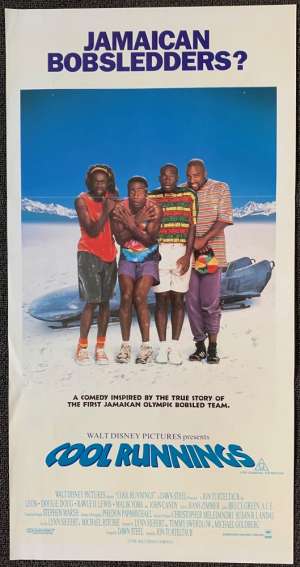 Daybill Poster. Cool Runnings is a 1993 American comedy sports film directed by Jon Turteltaub and starring Leon Robinson, Doug E. Doug, Rawle D. Lewis, Malik Yoba, and John Candy. Executives at Disney wanted Kurt Russell for the role of Coach Blitzer. However, John Candy personally insisted on portraying the coach and agreed to take a pay cut to do the movie. Scott Glenn was also considered for the role. Cuba Gooding Jr., Jeffrey Wright, and Eriq La Salle were each considered for a role as one of the four Jamaican bobsledders. The film is loosely based on the true story of the Jamaica national bobsleigh team's debut in competition during the 1988 Winter Olympics in Calgary, Alberta, Canada. It was shot in Calgary and Jamaica in February and March 1993. The cast and crew filmed in Calgary first, to take advantage of the snow. It was released in the United States on October 1, 1993 to positive reviews. The film's soundtrack also became popular with Jimmy Cliff performing a cover of Johnny Nash's "I Can See Clearly Now".