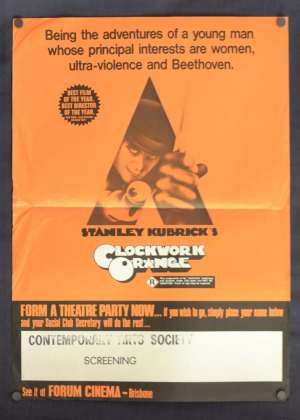 Rare Cinema Promotional Mini Daybill Poster. Clockwork Orange is a 1971 dystopian crime film adapted, produced, and directed by Stanley Kubrick, based on Anthony Burgess's 1962 novel of the same name. It employs disturbing, violent images to comment on psychiatry, juvenile delinquency, youth gangs, and other social, political, and economic subjects in a dystopian near-future Britain. Alex (Malcolm McDowell), the central character, is a charismatic, antisocial delinquent whose interests include classical music (including Beethoven), committing rape, and what is termed "ultra-violence". He leads a small gang of thugs, Pete (Michael Tarn), Georgie (James Marcus), and Dim (Warren Clarke), whom he calls his droogs (from the Russian word друг, "friend", "buddy"). The film chronicles the horrific crime spree of his gang, his capture, and attempted rehabilitation via an experimental psychological conditioning technique (the "Ludovico Technique") promoted by the Minister of the Interior (Anthony Sharp). Alex narrates most of the film in Nadsat, a fractured adolescent slang composed of Slavic (especially Russian), English, and Cockney rhyming slang. A Clockwork Orange was a box-office success in the United States. It grossed more than $26 million on a conservative budget of $2.2 million, was critically acclaimed, and was nominated for several awards, including the Academy Award for Best Picture. A Clockwork Orange remains an influential work in cinema and other media.