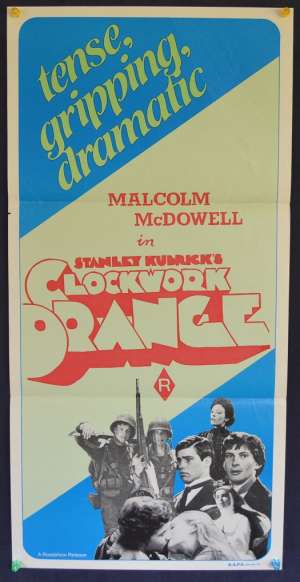 Re-issue Daybill Poster.Clockwork Orange is a 1971 dystopian crime film adapted, produced, and directed by Stanley Kubrick, based on Anthony Burgess's 1962 novel of the same name. It employs disturbing, violent images to comment on psychiatry, juvenile delinquency, youth gangs, and other social, political, and economic subjects in a dystopian near-future Britain. A Clockwork Orange was a hit with American audiences, grossing more than $26 million on a conservative budget of $2.2 million, was critically acclaimed, and was nominated for several awards, including the Academy Award for Best Picture. A Clockwork Orange remains an influential work in cinema and other media and is frequently referenced in popular culture.