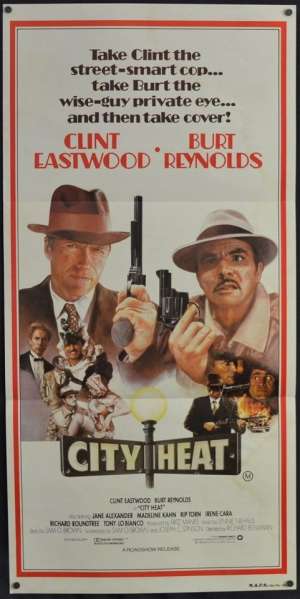 Daybill Poster with art by Julian Pucken.City Heat is a 1984 American buddy-crime-comedy film starring Clint Eastwood and Burt Reynolds, written by Blake Edwards, and directed by Richard Benjamin. Eastwood was cast as the lead and received a salary of $4 million. Blake Edwards who wrote the script, initially titled it Kansas City Jazz. He originally wrote the script in the 1970s while living in Switzerland. Edwards originally was attached to direct, but he was fired during pre-production and replaced with Richard Benjamin. Edwards retained co-writing credit under the pseudonym Sam O. Brown, the initials of which are S.O.B., a reference to his earlier film in which Andrews acted. Filming began in February 1984. On the first day, Reynolds was accidentally hit in the face with a metal chair during a fight scene. His jaw was broken, and he was restricted to a liquid diet, causing him to lose over 30 pounds by the time filming wrapped. His condition made headlines in the tabloids, which speculated he had AIDS. Clint Eastwood, a jazz aficionado, is one of the pianists heard on jazz-oriented soundtrack composed by Lennie Niehaus. City Heat was released in United States theatres in December 1984. It grossed $38.3 million at the North American box office.