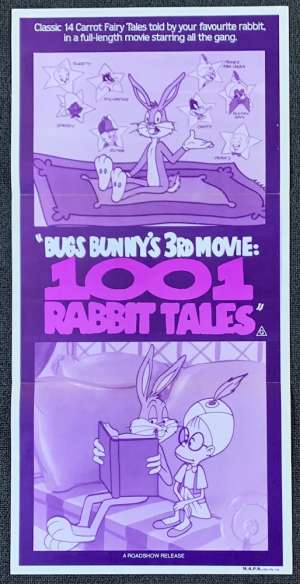 Daybill Poster.Bugs Bunny's 3rd Movie: 1001 Rabbit Tales is a 1982 Merrie Melodies film with a compilation of Warner Bros. cartoon shorts (many of which have been abridged) and animated bridging sequences, hosted by Bugs Bunny. This was the first Looney Tunes compilation film to use a completely original story and treat the included cartoon shorts as part of the story, as opposed to having the characters introduce the cartoons. The film also marks the first time that a Warner cartoon compilation feature used classic cartoon footage from more than one director. One Froggy Evening, Bewitched Bunny and Ali Baba Bunny were directed by Chuck Jones, and Aqua Duck was directed by Robert McKimson, while all other classic shorts included were directed by Friz Freleng. Another interesting aspect of this film is that many voice artists that were not credited in the original shorts are billed as "additional classic voices". For the first time, over twenty years after his death, Arthur Q. Bryan receives credit on a Warner Bros. production, even if it does fail to credit him as the voice of Elmer Fudd.