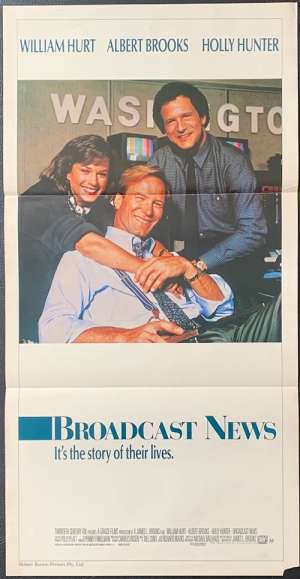 Daybill Poster.Broadcast News is a 1987 American romantic comedy-drama film written, produced and directed by James L. Brooks. The film concerns a virtuoso television news producer (Holly Hunter), who has daily emotional breakdowns, a brilliant yet prickly reporter (Albert Brooks) and his charismatic but far less seasoned rival (William Hurt). The female lead was originally written for Debra Winger, who worked with James L. Brooks in Terms of Endearment. However, Winger was replaced by Holly Hunter at the last minute because of her pregnancy. It also stars Robert Prosky, Lois Chiles, Joan Cusack, and Jack Nicholson (billed only in the end credits) as the evening news anchor. Broadcast News was a critical and financial success. The film made a total of $67.3 million worldwide and was nominated for 7 Academy Awards.