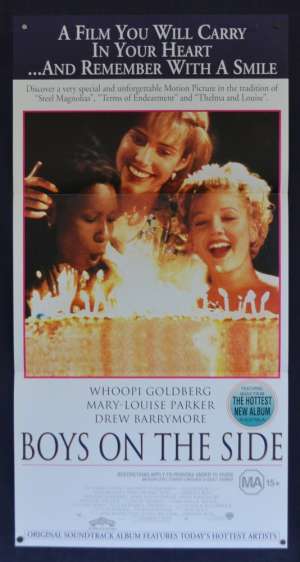 Original Australian Daybill Movie Poster Boys On The Side

Boys on the Side is a 1995 American comedy-drama film directed by Herbert Ross (in his final film as a director). It stars Whoopi Goldberg, Drew Barrymore and Mary-Louise Parker as three friends on a cross-country road trip. The screenplay was written by Don Roos. Boys on the Side received a positive response from critics and was entered into the 19th Moscow International Film Festival. The film's soundtrack album is made up entirely of contributions from female pop/rock artists, including Melissa Etheridge ("I Take You With Me"), Joan Armatrading ("Willow") and the Indigo Girls ("Power of Two"). Previous hit singles by Annie Lennox ("Why") and The Cranberries ("Dreams") are also included, as are new recordings by Sheryl Crow, Sarah McLachlan, Stevie Nicks and The Pretenders among others. The hit single from the movie soundtrack was Bonnie Raitt's cover of the Roy Orbison hit "You Got It".