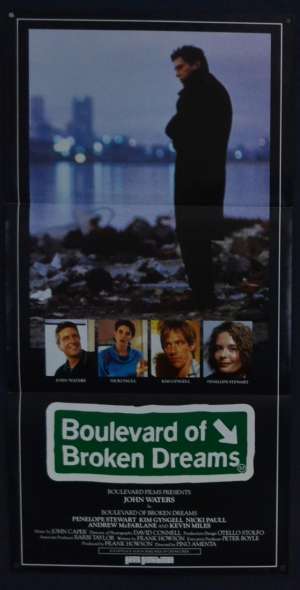 Daybill Poster.Boulevard of Broken Dreams is a 1988 Australian film about a successful Australian writer discovering he has cancer and returns home to Melbourne to be with his estranged wife and daughter.  Starring John Waters, Nicki Paull and Kim Gyngell, Waters earned an AFI Award for Best Actor and the film was popular enough for Boulevard Films to secure funding for a further five movies. The soundtrack album was released in 1988 through CBS. It earnt songwriters Frank Howson, John Capek, Beeb Birtles and David Scofield a nomination for the 1989 ARIA Award for Best Original Soundtrack, Cast or Show Album.