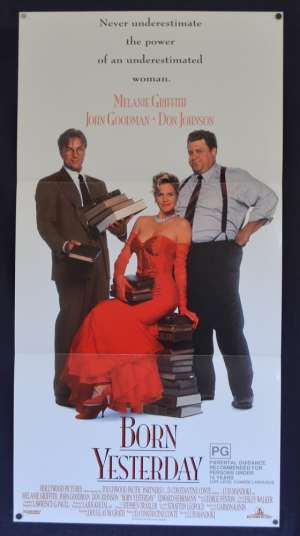 Born Yesterday is a 1993 film based on Born Yesterday, a play by Garson Kanin. The film stars Melanie Griffith, John Goodman and Don Johnson. It was adapted by Douglas McGrath and directed by Luis Mandoki. This version is a remake of the 1950 film of the same name that starred Broderick Crawford, Judy Holliday (in an Oscar-winning performance) and William Holden. The storyline goes: A wealthy but crude businessman, Harry Brock, on a trip to the nation's capital, is socially embarrassed by his ditzy and rather uncultured showgirl blonde girlfriend, Billie Dawn. He hires a reporter, Paul Verrall, to "teach her the ropes". Harry comes to regret it when Billie not only becomes more savvy, questioning his unscrupulous deals and refusing to cooperate in ways she normally would, but also falls in love with Paul.