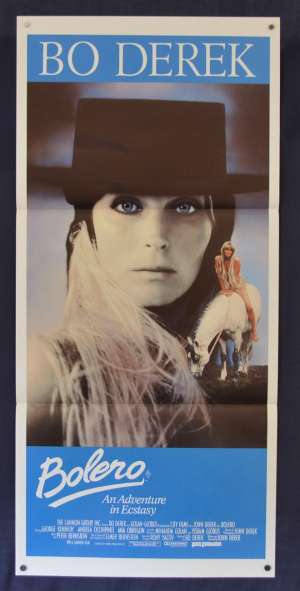 Bolero is a 1984 American romantic drama film starring Bo Derek, and written and directed by her husband John Derek. It also stars George Kennedy, Olivia D’Abo and James Stacy. The film centers on the protagonist's sexual awakening and her journey around the world to pursue an ideal first lover who will take her virginity. Executive producer and Cannon Films co-head Menahem Golan urged the Derek’s to make the sex scenes more explicit, despite the latter party's objections on the basis that the scenes were strong enough. Bolero was ultimately released with no MPAA rating, with a disclaimer on ads that no children under 17 would be admitted to the film. Despite this, many theater chains that normally refused to screen X-rated films did the same for Bolero. Bolero was a minor commercial success at the cinema. MGM released the film on DVD and although it is rated R, it is the full, uncut version of the film. It now enjoys a cult following.