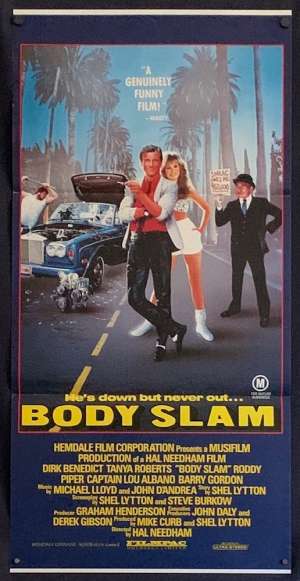 Daybill Poster Body Slam. M. Harry Smilac is a down-on-his-luck music manager who is having a hard time attracting talent and booking gigs for his band, Kicks. When making arrangements for a campaign fund-raiser, he mistakes Rick Roberts, a professional wrestler, for a musician and hires him. At that moment he becomes a wrestling manager and starts to book matches for him and his teammate Tonga Tom. The team is a success, and Harry decides to take his wrestlers and his band on a "Rock n' Wrestling" tour. The tour is a success, and Harry feels what it is like to be a winner again.