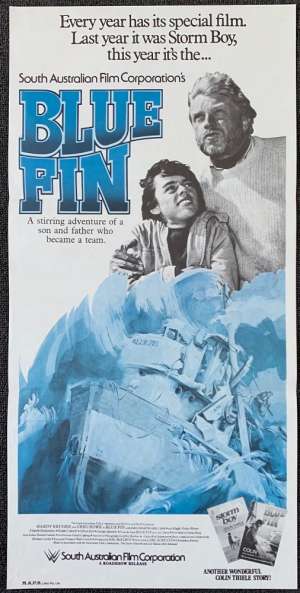 Daybill Poster.Blue Fin is based on a best-selling story by Colin Thiele and also stars a young Greg Rowe (Storm Boy), who plays Snook, the young son of an overbearing tuna-fishing captain (Hardy Kruger - The Wild Geese) on the South Australian coast. Constantly in the shadow of his father and older brothers, the young boy is told he is unsuited to a life at sea. But when a treacherous storm almost destroys the family trawler (Blue Fin), Snook has a chance to prove himself. Also stars John Jarrett (Picnic at Hanging Rock, Wolfcreek) and Hugh Keays-Byrne (Stone, Kangaroo).