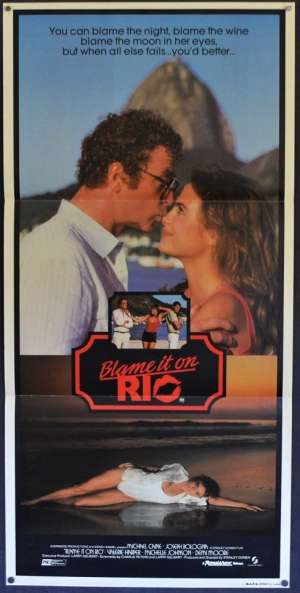 Daybill Poster.Blame It on Rio is a 1984 American romantic comedy film directed by Stanley Donen and written by Charlie Peters and Larry Gelbart based on the 1977 French film Un moment d'égarement. Starring an ensemble cast led by Michael Caine, Joseph Bologna, Michelle Johnson, Valerie Harper, Demi Moore, and José Lewgoy. This is the last theatrically released film directed by Donen, whose previous work included such notable pictures as Singin' in the Rain, On the Town, Seven Brides for Seven Brothers and Charade. The film was shot on location in Rio de Janeiro. Johnson, who was 17 at the time of filming, had to receive permission from a judge to appear topless in some scenes of the film. The storyline of the film was as such:Caine plays a man on holiday in Rio with his best friend. Both men have teenage daughters with them. When Caine falls for the amorous daughter (played by Michelle Johnson) of his best friend, they embark on a secret, if slightly one-sided relationship. Johnson's father is furious when he finds out about the 'older man' in his daughter's life, and sets out to hunt him down with the aid of Caine!