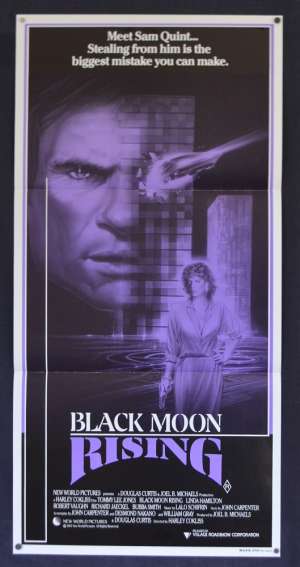 Daybill Poster with artwork by Steven Chorney.Black Moon Rising is a 1986 science fiction action thriller film directed by Harley Cokliss, written by John Carpenter, (The Thing) and starring Tommy Lee Jones (The Fugitive), Linda Hamilton (The Terminator), Robert Vaughn (The Towering Inferno), Keenan Wynn, and Richard Jaeckel. The plot revolves around the theft of a prototype vehicle called the Black Moon. The Black Moon (Car) was based on the 1980 Wingho Concordia II designed by Bernard Beaujardins and Clyde Kwok, made by Wingho Auto Classique in Montreal.Only one of these had been built, so in the movie, a copy of the car cast from a mold was used for stunts, as well as a third replica of the interior only.