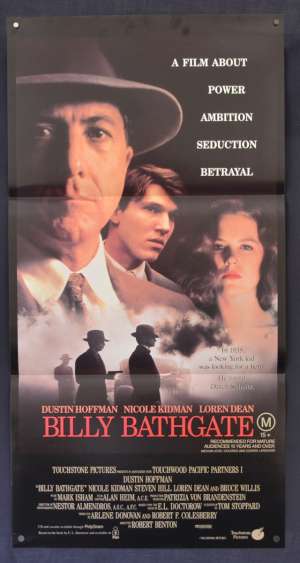 Billy Bathgate is a 1991 American gangster film directed by Robert Benton, starring Loren Dean as the title character and Dustin Hoffman as real-life gangster Dutch Schultz. The film co-stars Nicole Kidman, Steven Hill, Steve Buscemi, and Bruce Willis. The plot was as follows: Billy Bathgate is the story of a young man's rise from gopher to right hand man in Dutch Schultz' gang. Having been impressed by the youth, Schultz takes him under his wing so to speak. Billy soon finds himself in a world where wealth and fortune live next door to danger and death. Although Billy is a fictional character, at least four of the other characters in the film were real people from New York of the 1930s. The screenplay was adapted by British writer Tom Stoppard from E.L. Doctorow's novel of the same name. The film was shot in Hamlet, North Carolina and Saratoga Springs, New York. The film received a nomination for the Golden Globe Award for Best Supporting Actress – Motion Picture (Nicole Kidman).