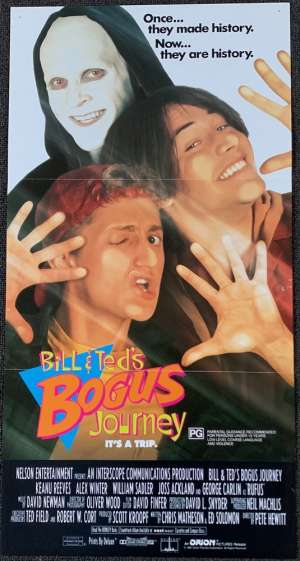 Daybill Poster.Bill & Ted's Bogus Journey is a 1991 American science fiction comedy film, and the directing debut of Pete Hewitt. It is the second film in the Bill & Ted franchise, and a sequel to Bill & Ted's Excellent Adventure. Keanu Reeves, Alex Winter and George Carlin reprise their roles.The film's original working title was Bill & Ted Go to Hell and the film's soundtrack featured the song "Go to Hell" by Megadeth, which Dave Mustaine wrote for the film. Despite mixed reviews from film critics, like its predecessor, the film has since gained a cult following thanks in large part to its spoof of Ingmar Bergman's 1950s classic film The Seventh Seal.