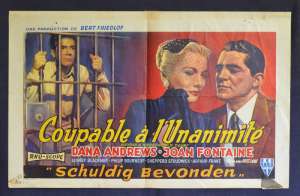 Beyond a Reasonable Doubt (Coupable a I’Unanimite) is a 1956 film noir directed by Fritz Lang and written by Douglas Morrow. The film stars Dana Andrews, Joan Fontaine, Sidney Blackmer, and Arthur Franz. It was Lang's second film for Friedlob and the last American film he directed. Film critic Dennis L. White describes the film as having "considerable impact, due not so much to visual style, but as to the narrative structure and mood and to the expertly devised plot, in which the turnabout is both surprising and convincing.