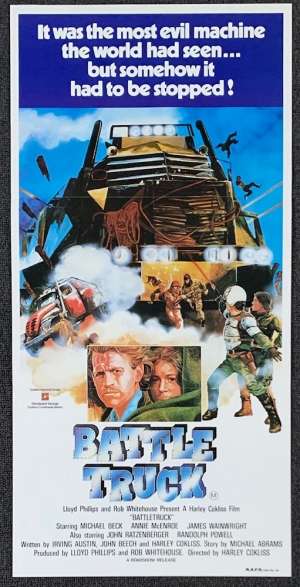 Daybill Poster.Battletruck (also known as Warlords of the 21st Century and Destructors in Italy) is a 1982 post-apocalyptic science fiction action film co-written and directed by Harley Cokliss and starring Michael Beck, Annie McEnroe, James Wainwright, John Ratzenberger, Bruno Lawrence and Marshall Napier. Set in the aftermath of a devastating thermo-nuclear war, the plot futuristic tale of collapsed governments and bankrupt countries heralding a new lawless age. A co-production between New Zealand and the United Kingdom, it was filmed on location in New Zealand and starring a number of local actors, and was part of a wave of similarly-themed films made in the wake of the success of the Mad Max series. Battletruck was filmed on the Central Otago plains in New Zealand.