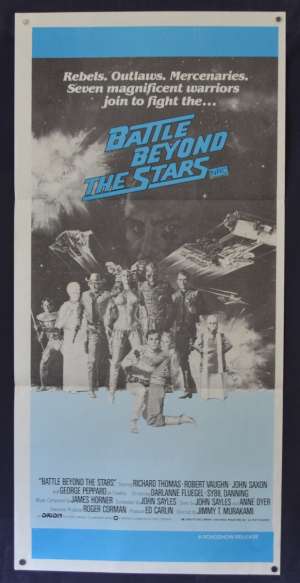 Battle Beyond the Stars is a 1980 American space opera film produced by Roger Corman and directed by Jimmy T. Murakami that stars Richard Thomas, Robert Vaughn, George Peppard, John Saxon,Sybil Danning, and Darlanne Fluegel. Battle Beyond the Stars, intended as a "Magnificent Seven in outer space" is based on The Magnificent Seven the Western remake of Akira Kurosawa's film The Seven Samurai. The screenplay was written by John Sayles, the score was composed by James Horner, and the special effects were designed by James Cameron. Battle Beyond the Stars was released in theatres on September 8, 1980 and grossed $1.7 million in its opening weekend and earned $11 million fairly quickly. James Cameron's special effects were praised as being impressive considering the film's low budget. The film has since gained a cult following.