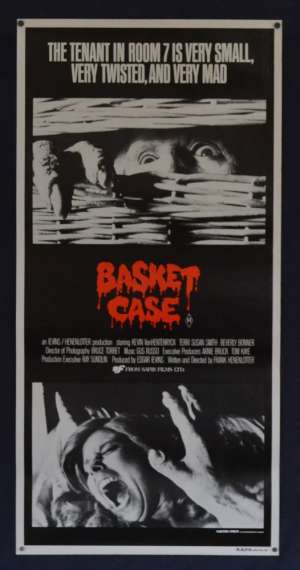 Basket Case is a 1982 American horror comedy film written and directed by Frank Henenlotter, and produced by Edgar Ievins. Kevin Van Hentenryck stars as a normal-looking person who seeks vengeance for the unwanted surgery that separated him from his deformed conjoined twin brother. The film gained an audience in the 1980s due to the advent of home video and has been considered a cult film. Rotten Tomatoes reports that 76% of 21 surveyed critics gave the film a positive review. Note although this movie was originally released in 1982 by Analysis Film Corporation as a very limited release in New York City, and the rights to distribution were quickly purchased by Safir Films Ltd. and it was edited into a more comedic film, which the director thought would help to sell it better. The movie was released in Los Angeles by Safir, then played continuously during midnight shows and in other limited theaters and in Australia. It was later re-released in 1984 by Rugged Films, Inc. who were forced to re-release the movie as unrated due to threats of an X-rating from the MPAA!