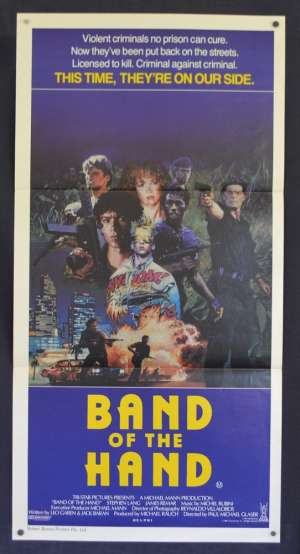 Poster art by Gyula Konkoly. Band of the Hand is a 1986 American action crime film directed by Paul Michael Glaser and produced by Michael Mann, starring Stephen Lang, Leon Robinson, James Remar, Lauren Holly, and Laurence Fishburne. The film's score was composed and performed by Michel Rubini (who worked on the Mann-directed Manhunter the same year), and the title track was written and performed by Bob Dylan. The story involves a group of five juvenile delinquents in their teens who are doomed to be prosecuted as adults for their crimes unless they take part in a new and experimental "program" led by a Vietnam veteran Native American named "Indian Joe" Tegra (Stephen Lang) from the Everglades. Forced into the swamps, the teens must learn to survive in the dangerous swamp and how to work together. Upon completion of the program, the group buys a vacant house in a dangerous part of Miami and slowly rebuilds the neighbourhood, kicking out the pimps, prostitutes and drug dealers.