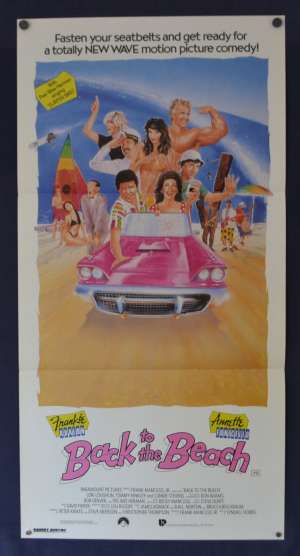 Original Australian Daybill Movie Poster Back To The Beach

Daybill Poster.Back to the Beach is a 1987 American comedy film starring Frankie Avalon, Annette Funicello, Bob Denver, Alan Hale Jnr, Don Adams and Connie Stevens. It was directed by Lyndall Hobbs. The original music score is composed by Steve Dorff. The film generated a total domestic gross of $13,110,903. It received a "two thumbs up" rating from Siskel and Ebert. The film is an open parody of the beach party films made popular in the 1960s, especially those in which Avalon and Funicello had appeared. The film was the idea of Frankie Avalon and was in development for a number of years. He hired several screenwriters and shopped the screenplay around town with Paramount taking the project and re-writing the script.The plot is merely the means of connecting the various sight gags, homages and in-jokes. All character names are taken from those earlier films. The film's soundtrack included covers of several well-known beach tunes, along with new songs by such artists as Aimee Mann and Private Domain.