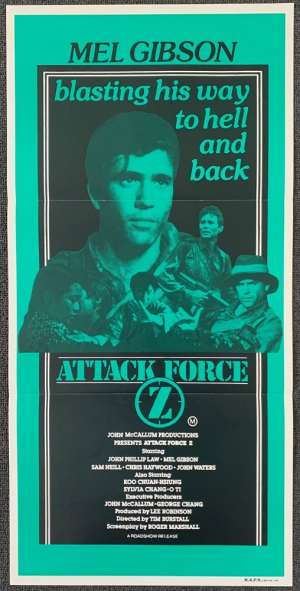 Country Of Origin Near Mint Daybill Poster.Attack Force Z (alternatively titled Z Men) is a 1982 Australian-Taiwanese World War II film directed by Tim Burstall. It is loosely based on actual events and was filmed in Taiwan in 1979. It was screened at the Cannes Film Festival on 18 May 1981.The film starred a who is who of Australian talent - Mel Gibson,Sam Neill,Chris Haywood and John Waters. The plot concerns Captain P.G. Kelly (Gibson), who leads a team from the elite Z Special Unit against the Empire of Japan during the Second World War. The film fictionalises the exploits of the Z Special Unit, which was also known as Z Force. It was a joint Australian, British and New Zealand commando unit. Its main brief was to conduct reconnaissance and sabotage missions throughout Japanese-occupied Southeast Asia. The script was based on a real-life commando rescue raid, Operation Opossum, where a team of commandos rescued the local sultan on the Japanese-held island of Ternate near Borneo. The film was originally entitled Z Men and was to be directed by Phillip Noyce (Patriot Games) but circumstances changed this outcome. Burstall the director has said ‘Attack Force Z sold everywhere, sold all over the world, and it got its money back”.