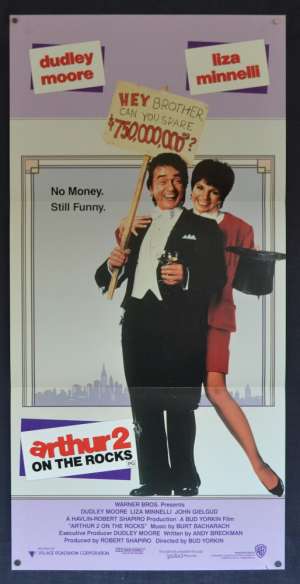 Arthur 2: On the Rocks is a 1988 American comedy film and the sequel to the 1981 film Arthur. Lead actors Dudley Moore and Liza Minnelli reprised their roles. John Gielgud, who won an Academy Award for his role in the original film, reappears briefly in a drunken hallucination on Arthur's part. The film co-stars Kathy Bates as a woman who helps the characters of Arthur and Linda adopt a baby. Stephen Elliott reprises his role from the first film, but his daughter, Jill Eikenberry originally, is now played by Cynthia Sikes. Burt Bacharach returns to score the film. The soundtrack also features songs by popular artists, including OMD and Kylie Minogue.