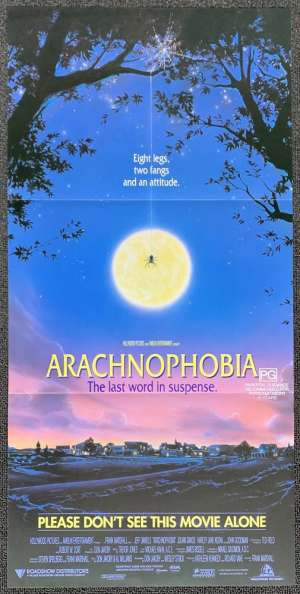 Original Daybill Poster with excellent John Alvin artwork.Arachnophobia is a 1990 American horror-comedy film directed by Frank Marshall and starring Jeff Daniels and John Goodman. It was the first film released by The Walt Disney Studios' Hollywood Pictures label, as well as being the directorial debut of Marshall. The film's story centers on a newly discovered Venezuelan spider being transported to a small American town that produces a new species of deadly spiders, which begin killing the town's residents one by one. It was a modest commercial success, gaining $53.21 million at the box office and received generally positive reviews from critics. The film has similarities with the 1977 film Kingdom of the Spiders. Producer Igo Kantor hinted in his Fangoria interview that Arachnophobia, which Spielberg produced, bears several similarities to Kingdom of the Spiders.