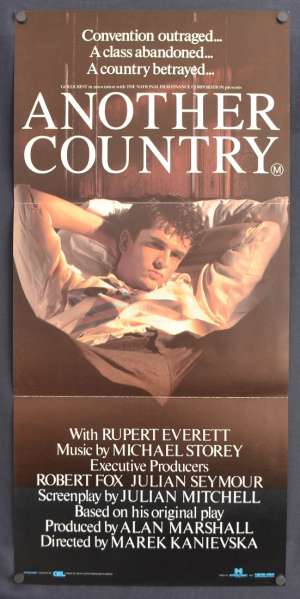 Daybill Poster.Another Country is a 1984 British romantic historical drama written by Julian Mitchell, adapted from his play of the same name. Directed by Marek Kanievska, the film stars Rupert Everett and Colin Firth in his feature film debut. Another Country is loosely based on the life of the spy and double agent Guy Burgess, Guy Bennett in the film. The film explores Guy Bennett’s homosexuality and exposure to Marxism, while examining the hypocrisy and snobbery of the English public school system. Rupert Everett, who had played the role of Bennett in the play's first run, was cast in that role for the film. Twenty years later, Everett would play the lead in another Marek Kanievska film, A Different Loyalty (2004), playing a spy based on Kim Philby, a close associate of spy Guy Burgess, whom the Bennett character is based on. Eton College declined to serve as a location for the film. With an additional fountain brought in, the Old Schools Quadrangle at Oxford University became an important location, along other localities such as the Bodleian Library, Brasenose College, Brasenose Lane, and Broad Street. Many interiors were shot at Althorp, seat of the Spencer family. Other scenes were filmed at Apethorpe Hall. The film was entered into the 1984 Cannes Film Festival where it won the award for Best Artistic Contribution. It was also nominated for three BAFTA Awards.