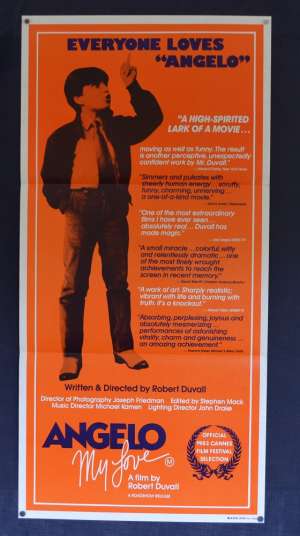 Angelo My Love is a 1983 American drama film about New York City Romani people, directed by Robert Duvall. It was screened out of competition at the 1983 Cannes Film Festival. Angelo My Love delves into the little understood and fascinating world of New York gypsies. Using real gypsies playing fictional versions of themselves. This critically acclaimed film explores the lifestyle, rites, myths and passions of the tight-knit urban subculture. Twelve year-old Angelo Evans is the street-wise charmingly precocious son of a fortune teller. When the boy accuses a sleazy gypsy, Steve "Patalay" Tsigonoff, and his foul-mouthed wife, Millie, of stealing an ancestral ring, he chases them to Canada. Angelo wants the ring for his future bride, Patricia, and nearly disgraces the family to get it back. Along the way, Duvall presents an extraordinary slice of gypsy life, highlighting there music and tribal customs, a wedding and a "kris" - the gypsies' court of justice.