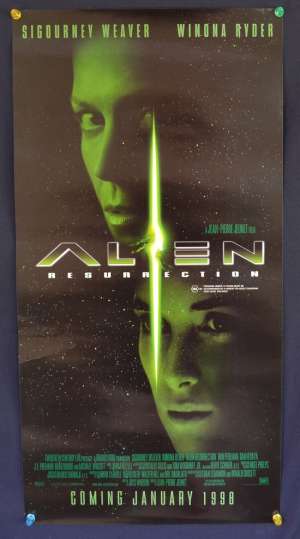 Daybill Poster.Alien Resurrection is a 1997 American science fiction horror film directed by Jean-Pierre Jeunet, written by Joss Whedon, and starring Sigourney Weaver and Winona Ryder. It is the fourth instalment in the Alien film series, and the final instalment in the original series. It was filmed at the 20th Century Fox studios in Los Angeles, California. Set 200 years after the preceding instalment Alien 3 (1992), Ellen Ripley is cloned and an Alien Queen is surgically removed from her body. The United Systems Military hopes to breed Aliens to study and research on the spaceship USM Auriga, using human hosts kidnapped and delivered to them by a group of mercenaries. The Aliens escape their enclosures, while Ripley and the mercenaries attempt to escape and destroy the Auriga before it reaches its destination: Earth. Additional roles are played by Ron Perlman, Dan Hedaya, J. E. Freeman, Brad Dourif, and Michael Wincott. Alien Resurrection was released on November 26, 1997, by 20th Century Fox, and grossed $47.8 million in North America. The film was well received internationally with a gross of $113.6 million, bringing its total gross to $161.4 million. It was the 43rd-highest-grossing film in North America in 1997. The film was nominated for six Saturn Awards (including Best Science Fiction Film, Best Actress for Weaver, Best Supporting Actress for Ryder, and Best Direction for Jeunet).