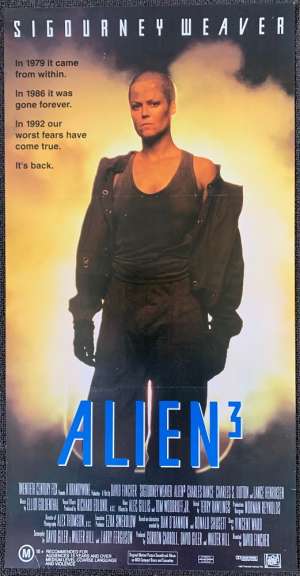 Daybill Poster Alien 3 is a 1992 American science-fiction horror film and the debut feature film of director David Fincher. The film takes place after the events of Aliens (1986) and stars Sigourney Weaver, Charles Dance, Charles S. Dutton & Lance Henriksen. The film had a difficult production, with various screenwriters and directors attached to the project, and shooting began without a finished script. It was David Fincher's large-budget film debut and was brought into the project after a proposed version with Vincent Ward at the helm was cancelled well into pre-production. Fincher has since disowned the film, blaming studio interference and lack of time to prepare. In 2003, a revised version of the film, known as the Assembly Cut, was released without Fincher's involvement. While underperforming at the United States box office, it earned over $100 million outside of North America.