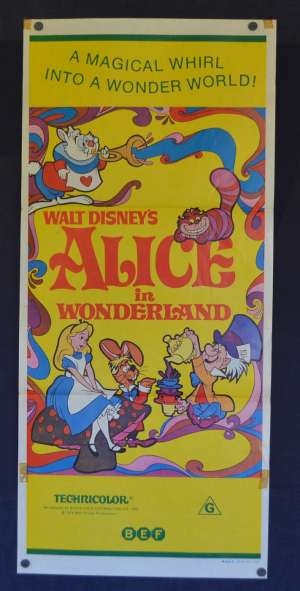 Daybill Poster.Alice in Wonderland is a 1951 American animated musical fantasy-adventure film produced by Walt Disney Productions and based on the Alice books by Lewis Carroll. The 13th release of Disney's animated features, the film premiered in London on July 26, 1951, and in New York City on July 28, 1951. The film features the voices of Kathryn Beaumont as Alice, Sterling Holloway as the Cheshire Cat, Verna Felton as the Queen of Hearts, and Ed Wynn as the Mad Hatter. Walt Disney first attempted unsuccessfully to adapt Alice into an animated feature film during the 1930s. However, he finally revived the idea in the 1940s. The film was originally intended to be a live-action/animated film; however, Disney decided to make it an all-animated feature in 1946. The film was considered a flop on its initial release, leading to Walt Disney showing it on television as one of the first episodes of his TV series Disneyland. It proved to be very successful on television, especially during the psychedelic era. It was eventually re-released in theaters which proved to be massively successful. It has been regarded as one of Disney's greatest animated classics.