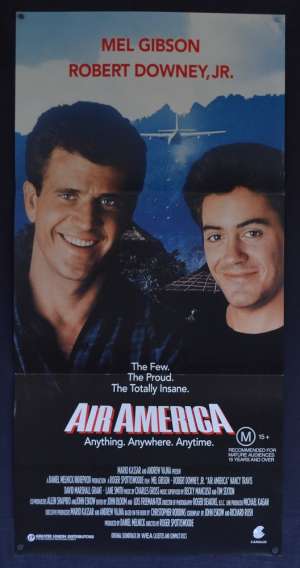 Air America is a 1990 American action comedy film directed by Roger Spottiswoode, starring Mel Gibson and Robert Downey Jr. as Air America pilots flying missions in Laos during the Vietnam War. When the protagonists discover their aircraft is being used by government agents to smuggle heroin, they must avoid being framed as the drug-smugglers. The plot of the film is adapted from Christopher Robbins' 1979 non-fiction book, chronicling the CIA-financed airline to transport weapons and supplies in Cambodia, Laos and South Vietnam during the Vietnam War. The publicity for the film, advertised as a light-hearted buddy movie, implied a tone that differs greatly from the actual film, which includes such serious themes as an anti-war message, focus on the opium trade, and a negative portrayal of Royal Laotian General Vang Pao (played by actor Burt Kwouk as "General Lu Soong"). The producers rented 26 aircraft from the Thai military.