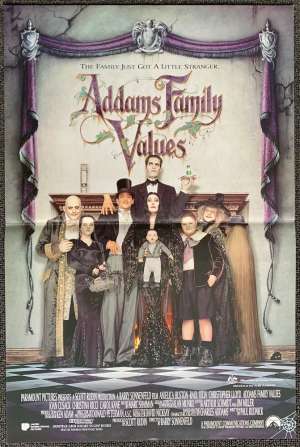 Original Mini Daybill.Addams Family Values is a 1993 American supernatural black comedy film, the sequel to The Addams Family (1991). It was written by Paul Rudnick and directed by Barry Sonnenfeld, and features many cast members from the original, including Raúl Juliá, Anjelica Huston, Christopher Lloyd, Christina Ricci, Carel Struycken, Jimmy Workman, and Christopher Hart. Joan Cusack plays a serial killer who marries Uncle Fester (Lloyd) intending to murder him for his inheritance, while teenagers Wednesday (Ricci) and Pugsley (Workman) are sent to summer camp. Included in the soundtrack is "Supernatural Thing", which was a chart success for Ben E. King. The film was acclaimed by critics and was also a commercial success. It is also Raúl Juliá's final theatrical film to be released in his lifetime.