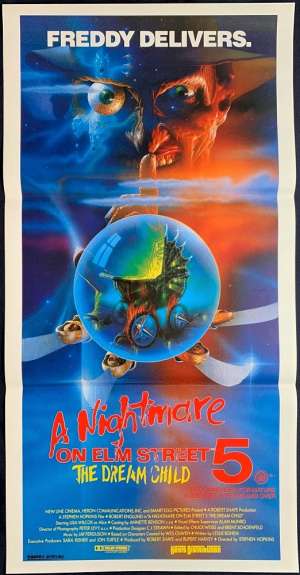 Daybill Movie Poster with Matthew Peak artwork.A Nightmare on Elm Street 5: The Dream Child is a 1989 American gothic slasher film directed by Stephen Hopkins and written by Leslie Bohem. It is the fifth instalment in the A Nightmare on Elm Street franchise, and stars Lisa Wilcox and Robert Englund as Freddy Krueger. The film follows Krueger, using a now pregnant Alice Johnson's baby's dreams to claim new victims. The film's general tone is much darker than that of the previous films. A blue filter lighting technique is used in most of the scenes. It is one of the final slasher films released in the 1980s.The Dream Child was released on August 11, 1989. In 1990 at the Fantasporto Awards, Director Stephen Hopkins won the Critics Award and was nominated for the International Fantasy Film Award. That year at the Young Artists Awards Whit Hertford won Best Young Actor in a Supporting Role.