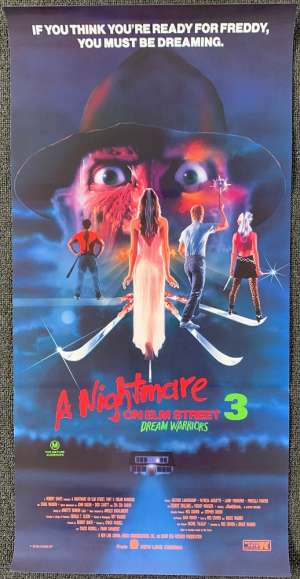 Daybill Poster A Nightmare On Elm Street 3 Dream Warriors - The best of the Elm Street sequels, this creepy, surreal fantasy features terrific effects, a fine young cast, and an air of grim fatalism that sets it apart from its giggly successors. Patricia Arquette stars as Kristen, whose nightmare leads to a slashed wrist which looks suspiciously like a suicide attempt. She is placed in a hospital psychiatric ward with a group of six other troubled teens who all dream about the same horribly burned man (Robert Englund) trying to kill them.