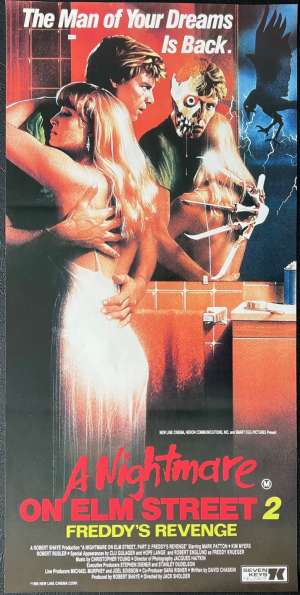 Daybill Movie Poster.A Nightmare on Elm Street 2: Freddy's Revenge  is a 1985 American slasher film directed by Jack Sholder and written by David Chaskin. It stars Mark Patton, Kim Myers, Robert Englund as Freddy Krueger, and Robert Rusler. The film follows Jesse Walsh, a teenager who begins having recurring nightmares about Freddy Krueger after moving into the former home of Nancy Thompson from the first film. Freddy's Revenge was released on November 1, 1985 and grossed $30 million at the domestic box office on a budget of $3 million. The film these days enjoys continued success as a cult classic with critics even appreciating too. It was distributed by New Line Cinema.