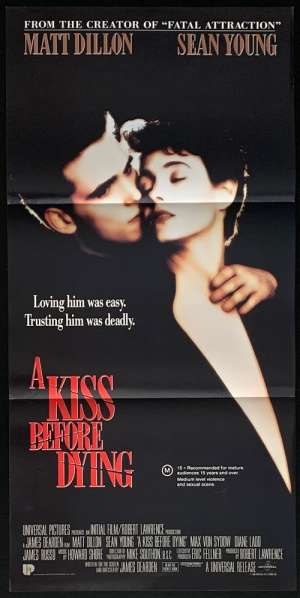 Daybill Poster. A Kiss Before Dying is a 1991 American erotic thriller film directed by James Dearden, and based on Ira Levin's 1953 novel of the same name, which won the 1954 Edgar Award for Best First Novel. The drama features Matt Dillon, Sean Young, Max Von Sydow, and Diane Ladd. The producers of A Kiss Before Dying wanted River Phoenix to play Matt Dillion’s role - Jonathan. They approached him several times for the role, and kept increasing their offers, but he didn't feel a connection to the material and felt he was unsuitable to play the part, so he repeatedly turned it down thus Matt Dillon was then cast. Diane Lane and Penelope Ann Miller were each considered for the dual roles of Ellen and Dorothy, but both rejected it. Bridget Fonda was originally cast but quit the production due to scheduling conflicts and Sean Young signed on to replace her. Upon release, Chicago Sun-Times film critic Roger Ebert praised the direction of the picture and Matt Dillon's work.