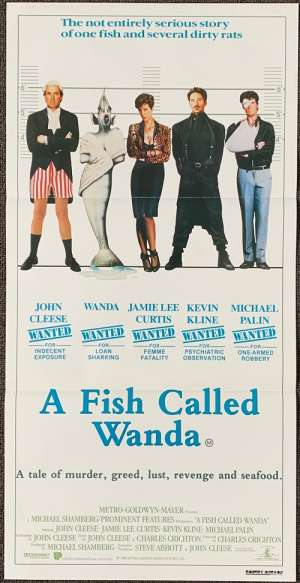 Daybill Poster with Rudy Obrero artwork. A Fish Called Wanda (original title – A Goldfish Called Wanda) is a 1988 British-American heist comedy film directed by Charles Crichton and written by John Cleese. It stars John Cleese, Michael Palin (both from Monty Python fame),Jamie Lee Curtis and Kevin Kline as a gang of diamond thieves who double-cross one another to find stolen diamonds hidden by the gang leader. The gang leader’s barrister - Archie Leach (a nod to Cary Grant’s real name) is played by John Cleese and becomes a central figure as femme fatale Wanda (Curtis) uses him to locate the loot. It was Crichton's last film. The film was released to positive reviews and was nominated for three Academy Awards including Best Director and Best Original Screenplay, winning Best Supporting Actor for Kline. Cleese and Palin won BAFTA Awards for Best Actor and Best Supporting Actor for their performances. During an original run of the film a Danish audiologist named Ole Bentzen died during a screening when his heart rate rose to an estimated 250–500 beats per minute from laughing at a scene too hard, leading to a fatal heart attack.