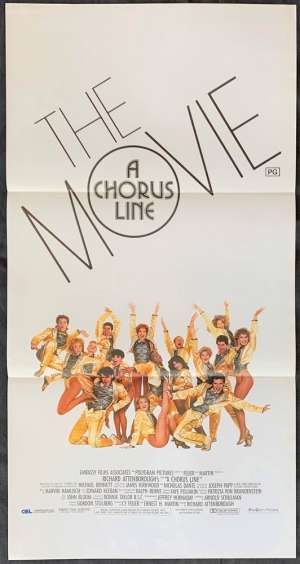 Daybill Poster.A Chorus Line is a 1985 American musical drama film directed by Richard Attenborough and starring Michael Douglas. In February 1984, according to Attenborough, the singer Madonna auditioned at the Royale Theatre on Broadway for a dance role in the movie using her birth name of Ciccone. He rejected her. The screenplay by Arnold Schulman is based on the book of the 1975 stage production of the same name by James Kirkwood Jr. and Nicholas Dante. The songs were composed by Marvin Hamlisch and Edward Kleban. A Chorus Line was released theatrically on December 13, 1985 by Columbia Pictures and would go on to be nominated for two Golden Globe and three Academy Awards.