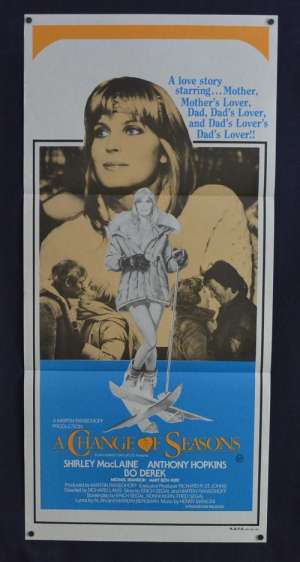 Daybill Poster.A Change of Seasons is a 1980 American comedy-drama film directed by Richard Lang. It stars Anthony Hopkins, Shirley MacLaine and Bo Derek. Consenting Adults was the film's working title. This movie has been considered a 1980s update of Bob & Carol & Ted & Alice (1969).Audrey Hepburn was in negotiations to star, as announced by "Daily Variety", in their August 25, 1975 edition, but in the end, Hepburn was not in the movie. Her role was likely that of Karen Evans (The Shirley MacLaine character). Filming began in late December 1979 to January 1980 on-location in Massachusetts, two months after 10 (1979) was released, when the unknown Bo Derek was fast becoming the focus of worldwide attention. Additional love scenes were added to the later studio phase of the shoot, most of which appear in the opening shots of the movie.The theme song "Where Do You Catch The Bus For Tomorrow?" was written by Alan and Marilyn Bergman and Henry Mancini and performed by Kenny Rankin.