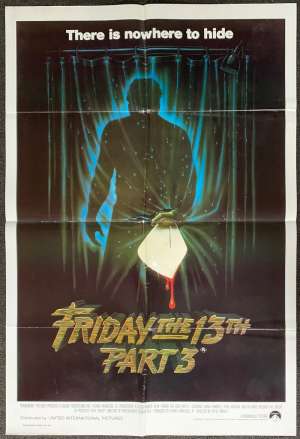 Friday the 13th Part III (also known as Friday the 13th Part 3: 3D) is a 1982 American slasher film directed by Steve Miner and produced by Frank Mancuso Jr.. It stars Dana Kimmell, Richard Brooker, Paul Kratka, Larry Zerner, and Tracie Savage. The film marks the debut of antagonist Jason Voorhees wearing his signature hockey mask, which has become a trademark of both the character and franchise, as well an icon in American cinema and horror films in general. The film was theatrically released on August 13, 1982, grossing over $36.6 million at the US box office on a budget of $2.3 million and became the second highest-grossing horror film of 1982. The film has been noted by critics as one of the most violent of the series, with a total of fourteen deaths.