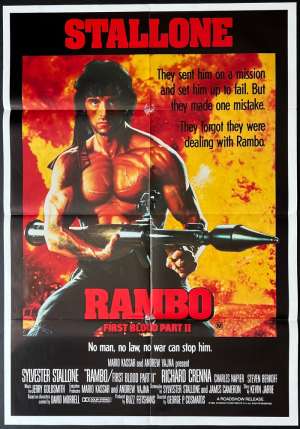 One Sheet Poster.Rambo:First Blood Part II is a 1985 action film directed by George P. Cosmatos and starring Sylvester Stallone, who reprises his role as Vietnam veteran John Rambo. It is the sequel to the 1982 film First Blood, and the second installment in the Rambo film series. Picking up where the first film left, the sequel is set in the context of the Vietnam War POW/MIA issue; it sees Rambo released from prison by federal order to document the possible existence of POWs in Vietnam, under the belief that he will find nothing, thus enabling the government to sweep the issue under the rug. Richard Crenna reprised his role as John Rambo's senior officer.Producers considered that Rambo would have a partner in the rescue mission of POWs. The producers allegedly wanted John Travolta to play Rambo's partner, but Stallone vetoed the idea. Lee Marvin (who was considered to play Colonel Trautman in the first film) was offered the role of Marshall Murdock, but declined, leading to the role being played by Charles Napier. The film was shot between June and August 1984, and was shot on location in the State of Guerrero, Mexico, and Thailand. During filming, special effects man Clifford P Wenger, Jr. was accidentally killed by one of the film's explosions.Commercially it was a major worldwide box office hit!