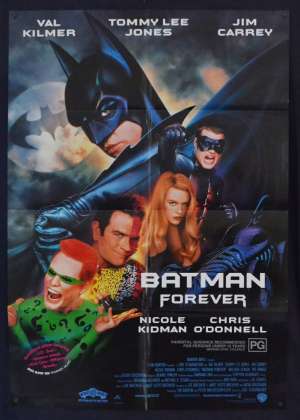 Australian One Sheet Poster.Batman Forever is a 1995 American superhero film directed by Joel Schumacher and produced by Tim Burton, based on the DC Comics character Batman. Val Kilmer replaced Michael Keaton as Bruce Wayne / Batman because Keaton chose not to reprise the role due to Burton stepping down as director. William Baldwin and Ethan Hawke were initially considered for Keaton's replacement before Kilmer joined the cast. The film also stars Chris O'Donnell, Nicole Kidman, Tommy Lee Jones, and Jim Carrey. The plot focuses on Batman trying to stop Two-Face (Jones) and the Riddler (Carrey) in their villainous scheme to extract confidential information from all the minds in Gotham City and use it to learn Batman's identity and bring the city under their control. The film was released on June 16, 1995 and was a financial success.