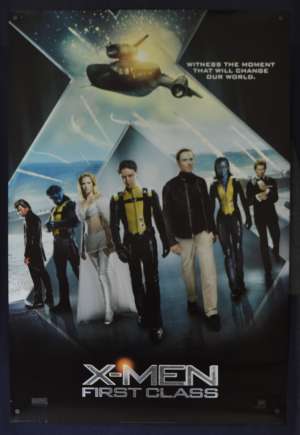 USA One Sheet Poster.X-Men: First Class (stylized onscreen as X: First Class) is a 2011 American superhero film, based on the X-Men characters appearing in Marvel Comics. The film was directed by Matthew Vaughn and produced by Bryan Singer. The story is set primarily in 1962 during the Cuban Missile Crisis, and focuses on the relationship between Professor Charles Xavier (James McAvoy), and Erik Lehnsherr / Magneto (Michael Fassbender), and the origin of their groups—the X-Men and the Brotherhood of Mutants, respectively, as they deal with the Hellfire Club led by Sebastian Shaw (Kevin Bacon), who is bent on world domination. The film co-stars Rose Byrne, January Jones, and Oliver Platt. The film also introduces new actors to the series including Nicholas Hoult and Jennifer Lawrence who, like McAvoy and Fassbender, reimagine popular characters from the franchise (Beast and Mystique) that were already established in the original trilogy. First Class was a box-office success, becoming the seventh highest-grossing in the film series, and received positive reviews from critics and audiences, who praised the fresh revival of the franchise as well as its acting, screenplay, direction, action sequences, visual effects, and musical score.