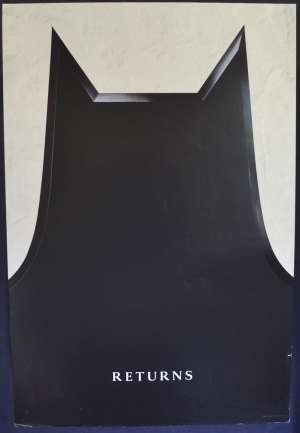 One Sheet Poster Recalled Art.Batman Returns is a 1992 American superhero film, directed and produced by Tim Burton, based on the DC Comics character Batman. It is the second installment of Warner Bros.' initial Batman film series, with Michael Keaton reprising the title role of Bruce Wayne/Batman. The film introduces the characters of Max Shreck (Christopher Walken), a business tycoon who teams up with the Penguin (Danny DeVito) to take over Gotham City, as well as the character of Catwoman (Michelle Pfeiffer).  The film was nominated for Academy Awards for Best Visual Effects and Best Makeup, as well as two BAFTA awards. Batman Returns's budget was an estimated $65 million, grossing $266,822,354 worldwide.