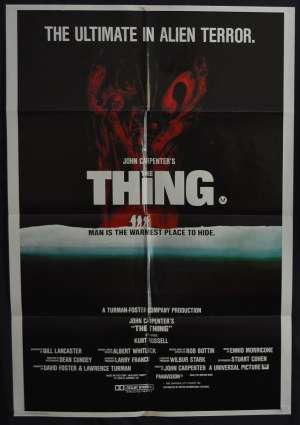 Very rare Original Australian One Sheet movie poster. The Thing 1982 Directed by John Carpenter and starring Kurt Russell. ‘The Thing’ when it was first released in the US bombed due to the success of E.T. and the competition of Bladerunner. It was not expected to do well in Australia consequently. Full colour one sheets like the one here of which only 500 – 1000 were printed by W & B Litho were released for the screening of the film in Australia. However the distributors were caught by surprise when the film took off in Australia and the film went on to screen for 3 months in cinemas – independent ones particularly. Consequently a re-issue was required to meet the demand of the screenings. This re-issue is the ‘all red’ artwork printed by M.A.P.S. The full colour First Release one sheet size above printed by W & B litho is very rare and highly collectible. Any collector that has the W & B Litho artwork daybill will want to have this rare one sheet first release companion piece.